Chateau du Chenonceau – Beautiful Inside and Out 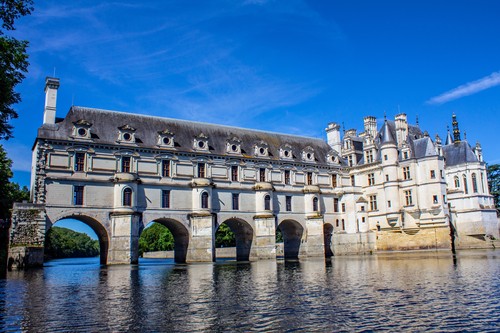 This summer we invited Silver Travel Adviser journalist Helen Jackson to join us on Nymphea to see the Loire Valley. She reported on the things she saw on a day-by-day basis – today we feature her visit to the wonderful Chateau-du-Chenonceau.

One of the highlights of our cruise on the barge Nymphea, on the Loire Valley’s River Cher, should have been cruising under the arches of Château du Chenonceau. However, recent, exceptionally hot weather had resulted in low water levels, but also a lock damaged by incompetent workmen meant we couldn’t reach Chenonceau.

Instead, our captain Francisco, arranged for us to take an electric boat under the arches of the château, one of the most beautiful and unusual in the Loire Valley. 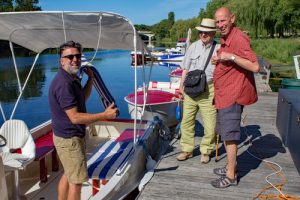 We’d taken our cushions from the barge and the four of us were soon settled on the small boat, with Francisco at the steering wheel. I thought the river would be really busy, but apart from a couple of kayaks, we had it to ourselves. As we glided slowly and silently towards the stunning Château, we clicked away with our cameras. We motored through and round the six arches including a narrow one where boats would have dropped off supplies to the kitchen. As with other château we visited, it was made from white tuffeau stone from the Loire Valley area.

After a superb lunch back on board the barge, we set off mid-afternoon by road to view the château, known for warring ladies. King Henry II had given the château to his favourite lady, Diane de Poitiers who was renowned for her beauty, intelligence and sense of business. She created gardens, which were some of the most spectacular and modern of the day. However, on his death, Henry’s widow Catherine de’ Medici, removed Diane and made the gardens even more stunning and raised the height of the two-floored gallery to host elegant and glorious parties. 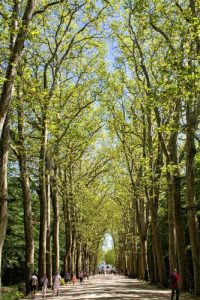 From the car park, it was a long, but flat walk up a beautiful tree-lined avenue to the château. Once inside, we followed the marked route and found it wasn’t too crowded as the Parisians hadn’t yet started their holiday. In the long galleries over the river, all the windows were open letting in a refreshing breeze on what was a hot day. Although the river had been quiet in the morning, we now saw lots of people in kayaks and rowing boats and walking along the riverbanks seeking photo opportunities. Despite its grandeur, the gallery had been used as a military hospital during World War 1. Whilst in the second World War, the river Cher corresponded to the line of demarcation between occupied territories and Free France and the gallery became an escape route used by the Resistance. On the top floor an exhibition explained the full history of the château.

Back in the main building we went through the chapel, elegant bedrooms, halls and lavish drawing rooms. In the spectacular kitchen gleaming copper pans and moulds hung on the walls and adorned the shelves. There was an area where they butchered the hunted animals on large thick chopping blocks. In various places, the emblem of the château was visible, a D, C and H intertwined. 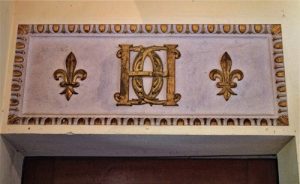 Outside we looked round the two gardens we’d seen from the gallery. The larger one, designed by Diane de Poitiers and the smaller, by Catherine de Medici. Both were typically French and symmetrical in style with beautifully colour co-ordinated planting.

We also saw the tied cottages where the workers still live, the flower arranging area, vegetable and flower gardens, two old Bentley cars, the carriage shed and a watering place where the horses would cool off having been driven from Paris. There were various eating and drinking options and other areas we didn’t have time to explore, the maze, recreated military hospital and Queen’s apothecary.

We ended our visit in the Domes Wine Cellar, a lovely cool arched room where we tasted a white, rose and red wine and chose red to take back on board.

It would be easy to spend the day here.

Gastronomic treats at La Boulaye
Visiting notable historic sites and Chateaux is hungry and thirst-making work. All meals and wine are included in the price of the cruise, including a few scheduled meals ashore. Here...
41 Likes

Chateau de Nitray
Another day another Chateau. Silver Travel Advisor journalist Helen Jackson explains the interest and beauty of Chateau de Nitray whilst cruising on the barge Nymphea, on the Loire Valley’s River...
46 Likes
This website uses cookies to improve your experience. We'll assume you're ok with this, but you can opt-out if you wish. Accept Our Privacy Policy
Privacy & Cookies Policy