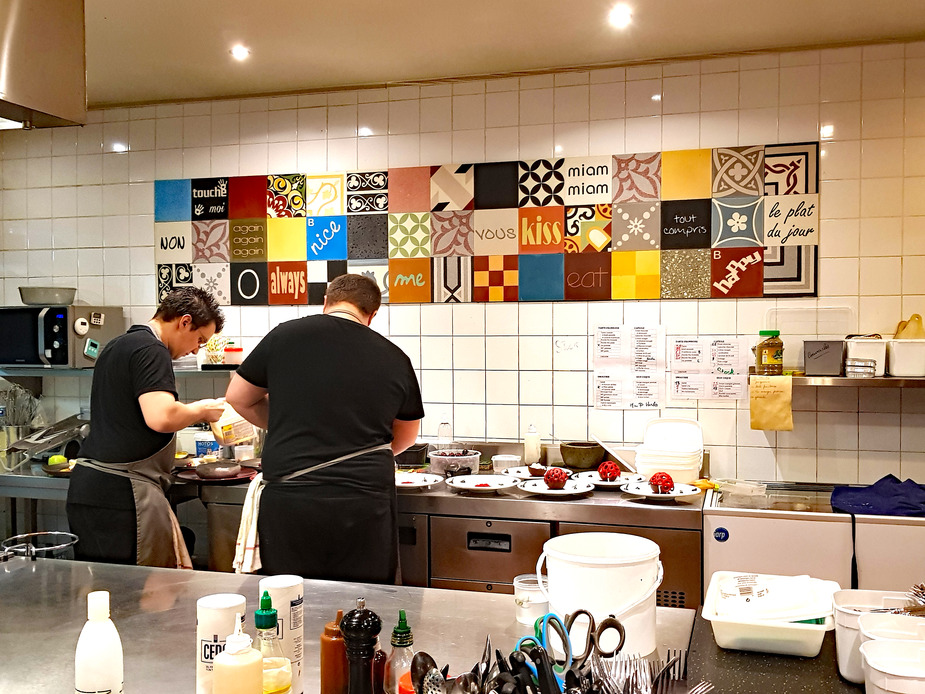 Visiting notable historic sites and Chateaux is hungry and thirst-making work. All meals and wine are included in the price of the cruise, including a few scheduled meals ashore. Here Helen writes about a restaurant visit 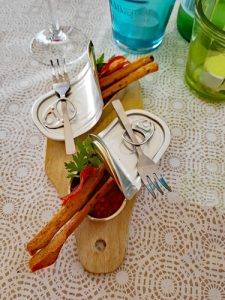 and it’s fair to say her bouche was definitely amused!

On board the barge Nymphea, on the Loire Valley’s River Cher, dinner is usually prepared by Lucy our fabulous cook. However, during the middle of the six-night cruise, we had dinner at La Boulaye in the small town of Athee sur Cher.

The restaurant was only a short drive away from our mooring but appeared to be in the middle of nowhere. It looked very unremarkable from the front and we were led through a restaurant, with only two diners, to a large terrace which was around half full. We had a lovely round table, set a little apart. 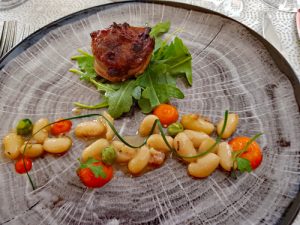 We started with a complimentary glass of champagne whilst perusing the menu. Stefan the owner produced menus in English and explained there were two options: a set menu with no choice, but with two starters and another with a limited choice. As the set menu was said to be ideal for travellers in Touraine, which we were, we both plumped for it. The dishes were interestingly described:

Pork dish with the warm Tournedos of pork knuckles.

The carp: with small fry to pick with fingers. 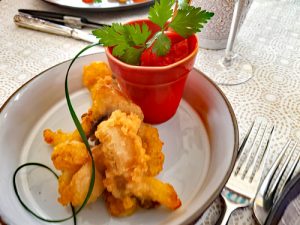 The pullet of Racan: the poultry of Touraine (whole cooked first, then boneless cut, you can taste the delicate flesh of this chicken). Served surrounded by daikon radish with succulent spinach and small sour reduction.

The red fruit with a wafer, praline and raspberry.

There was a small amuse bouche of a sardine can with a vegetable ratatouille, slice of chorizo and fennel grissini.

Francisco, our Captain and host, chose to go with our starters, a bottle of Domaine de Ladoucette Pouilly Fume as the winery follows a family tradition producing some of the best Loire wines. Later we found that the bottle we enjoyed retails at around £35. To accompany our mains, Francisco chose a red – Cȏte Villes Vignes from Domaine La Grange Tiphaine, once again from the Loire Valley. 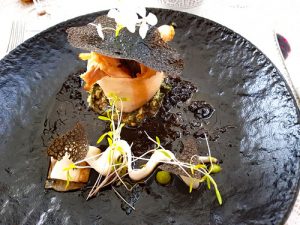 It was fabulously and exquisitely arranged food, although it was a little strange having two starters presented at the same time. Fortunately, the portions weren’t huge as we’d had an excellent lunch on board, but we had to decline the spectacular old-fashioned wooden cheese trolley and settled for espresso. On our way out, we were invited into the kitchen where we met Stefan’s wife, the chef, who told us four of them had prepared 40 meals.

The inside design and decor were fabulous, and a piano had some of its keys removed to hold cutlery. 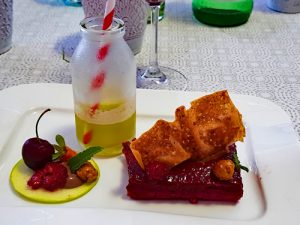 WONDERFUL BUT NOT FUSSY

Although the food is wonderful, it wasn’t a pretentious place. Although we’d swapped our barge shorts and t-shirts, for smart casual wear, we needn’t have bothered as others hadn’t. The service was professional, but not fussy: the white wine was presented in a chiller sleeve which had seen better days, and we were left to husband our own wine.

Despite being well off the beaten track, La Boulaye appears to have a strong following as, on a Wednesday night just out of season, every terrace table was full.