The Loire Valley on the Cher River

The Loire is France’s longest river. It has been a major waterway since Neanderthal man fashioned boats from tree trunks to export their flint tools up and down the river. Then came the ancient Romans, who founded cities along its bank. From around 1500, French nobility fell in love with the stunning landscape of the Loire, building some of the most fabulous châteaux in the world. No surprise, the entire stretch of water between Angers, Blois, Orleans (associated with Joan of Arc), and Tours, known locally as the Valley of the Kings, has been designated a UNESCO World Heritage Site.

Today, the Loire Valley offers tourists a voyage of discovery and delight. But to appreciate all the Loire has to offer, a compact vessel is essential — and the three-cabin, six-berth Nymphea is in a class of her own. No other Hotel Barge on the French Waterways can take you right underneath the most famous château in the world — the legendary Château de Chenonceau. 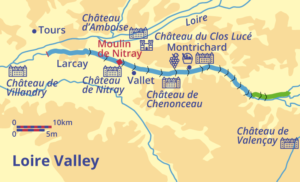 Nymphea has three comfortable cabins providing two twin-bedded staterooms and one twin or double stateroom all with en-suite facilities. Nymphea is 81ft long by 14ft wide. The dining saloon is decorated in a warm classic decor of rich varnished hard woods, stained glass and brass light fittings which provides a welcoming country house atmosphere. There are six bikes aboard for independent exploring, and an air-conditioned minibus for daily excursions.

THE NYMPHEA in detail

Thank you for the wonderful week! We will long remember
the food, the wine, the cruising, the tours, the walks,
the lounging on the deck, the conversation and just plain fun!

A week of fabulous food, wonderful wines, terrific trips, comfy cabins,
cheery company and most of all the super duper staff.

You made this a truly memorable week – great food,
fabulous wine and such attention to detail.

I have traveled all over the world and this is by
far one of the finest experiences of my life.